The latest entry to the A Song of Ice and Fire, A Dance with Dragons was released recently and I was very excited to borrow it from my friend. It actually took me a while to finish it, but I certainly enjoyed it more that I did A Feast for Crows.

Once again, Martin introduces a few new characters, which seems to be pretty late in the game to be introducing key characters. Some of the characters are not new, per se, but were previously thought to be dead. Many of my favourite characters, like Jaime Lannister and Petyr Baelish, are not given much space in the book. Those characters that are usually the centre of action do not really have much to do either, including Tyrion and Anya. However, parts of the book were really interesting and still really detailed. The ending chapters have some kind really shocking events, but it is hard to take the deaths as seriously as one did in the earlier novels.

Dance with Dragons feels like a placeholder for the next book, as none of the main characters seem to move anywhere, with the notable exception of Bran and the Reed siblings. A lot of things happen to and about the characters, and much of the book feels like the Martin is on the cusp of moving the story forward, but it never seems to quite get there. Despite all this, I am still very excited to read the next one, and was happy to read the sample chapter from The Winds of Winter that was released. The story has such enormous promise, and the level of care taken with the story is so obvious, that it is so easy to get invested in the series.

I picked this book up by chance at a charity fundraiser, attracted first by the beautiful cover, which is quite lovely in person. I also love Neil Gaiman, so was eager to read the book.  Fragile Things is a quite lengthy collection of short stories and poems, with a lengthy foreword from Gaiman explaining a bit about each of the stories. Many of them seem to have been written in response to requests for particular anthologies, which I found kind of interesting – I imagine that Gaiman’s work is quite sought after by people putting together anthologies.

I have very few memories of the poems, but several of the stories are quite lovely, written in many different styles. “The Problem of Susan” looks at what happened to Susan Penvensie after her brothers and sister were killed in the Narnia series. It is a very wistful and sad story, and I have been thinking about it for months afterwards. “A Study in Emerald” is a Lovecraft/Doyle inspired tale, and was very clever and particularly amusing after having watched the recent Sherlock series on BBC. “Bitter Grounds” is a clever little zombie story, and pokes some fun at academic conferences and their attendees for good measure. There are some interesting ghost stories, and some unsettling stories about some evil people. American Gods‘ Shadow makes an appearance in one of the stories, and you can see some ideas that later found homes in other works, particularly The Graveyard Book, I think.

I really enjoyed this book of short stories, and found it to be perfect for travelling. It was engrossing, so that you could block out all the airport noise, but with short stories it is easy to pick up and put down again without unduly interrupting your reading. I understand that several of the stories are available in other places, but if you haven’t read them, I recommend this book. 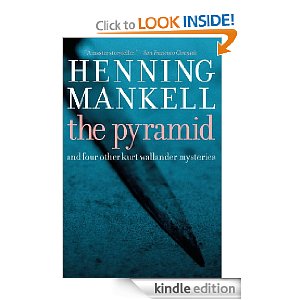 Years ago I read Mankell’s The Return of the Dancing Master (not a Wallander mystery) and found it enormously dark and well written. I have recently watched the excellent Wallander television series, starring Kenneth Branagh with support from the delightful Tom Hiddleston, and subsequently picked up the only Mankell book left on the library shelves. The Pyramid is a collection of short stories about Wallander’s early years, from about age 21 until his mid-forties.

The stories in this collection are very well written, each containing a well thought out mystery that kind of reflects Mankell’s thoughts on Swedish society as a whole. The characters are well-drawn and genuine, and it is interesting to see how they and their relationship with Wallander change throughout the stories. I have not yet read the Wallander novels, but I suspect this background information will be useful when I read them. Kurt Wallander is an excellent character, very human. Having recently read some of the Millenium series, it is hard not to compare him to Blomkvist – Wallander is so much more realistic and relatable. He is a man with normal familial troubles, every woman he meets does not automatically fall into bed with him, he is distressed at the world around him, and he doesn’t always make giant leaps or have deus ex machina hackers to solve all his mysteries for him. The police work is hard and often depressing, but he is good at it and knows that it is his duty. Wallander feels real, in a way that Blomkvist and even Rebus do not.

As with the Larsson novels, I did find much of the dialogue stilted, and again wonder about the quality of the translation. However, I enjoyed the book, and think it would be even better if I were more familiar with the full length novels. I will search them out in the New Year, and in the interim recommend this, The Return of the Dancing Master, and the BBC Wallander series as well.

Much like The Song of Ice and Fire series, I am a little late to the Millenium series. Much of what I have to say here will probably echo the discussions regarding the recently released David Fincher movie.

The story centres largely on the investigation by journalist Mikael Blomkvist into both a corporate pirate and a missing girl from a rich and powerful family. He becomes entangled in an enormous murder mystery, and is helped in his investigations by Lisbeth Salander, one of the most interesting female characters I have read about in some time. She likely has Asperger’s, and is generally  hard to understand, but is just so strong and determined and intelligent that is is hard not to be fascinated by her. The mystery itself is kind of contrived, and Blomkvist is kind of an unlikely Lothario, but the story itself it really engrossing while you are reading it. After I had finished the book, I was really uncomfortable with how the female characters are generally treated in the novel. I now understand that the original title of the book was Men who Hate Women, which seems a much more appropriate title. I have had trouble recommending this to some people, not so much because of the graphic violence, but the sense of anger and selfishness that seems pervasive throughout.

Overall, I enjoy the writing style of Henning Mankell quite a bit more that I do Larsson’s (I am 3/4 of the way through The Girl Who Played with Fire, which is much slower than Dragon Tattoo), although both of them seem to have some stilted dialogue. I don’t know if that is a characteristic of Swedish writing in general or a by product of awkward translation. I really enjoyed the book at the time I read it, was eager to continue the series, but it certainly isn’t something I will ever read again.

Jeanette Walls’ first book, The Glass Castle, was one of my favourite books of the past few years, and has kind of coloured how I look at many of the memoirs and novels I have read since. I think I specifically referenced it in my review of The Immortal Life of Henrietta Lacks, in fact. Walls had a very difficult upbringing with some colourful family members, and this book is a novelization (of sorts) of her grandmother’s story. The story is told in the voice of Lily Casey Smith, and contains as much truth about Smith’s life as Walls was able to collect.

Smith’s life story remind me of the experience of Laura Ingalls Wilder, truthfully, although of course created for a vastly different audience. It is a hard life of disasters, sacrifice, risk and adventure. She is a capable, hard working and intelligent woman who struggles to create a good life for herself and her family on farms, ranches and in a variety of early American cities. The book also describes some of the childhood and adolescence of of Walls’ mother Rosemary, who is so memorably described in The Glass Castle. The reader can certainly see how her character was formed at an early age, and the brief description of Walls’ parents courtship is also illuminating. I think the book might have been a bit short, as some of the events are discussed only briefly, although they would be interesting to learn about in more detail . I am not certain if that is because Walls didn’t have the information available or if that was an editorial choice.

Walls is a gifted storyteller, and moves easily into writing in the voice of another. Smith is an enormously interesting and courageous character, and the story moves along briskly. While I did not love this book as I did Wall’s earlier book, I would still highly recommend it. 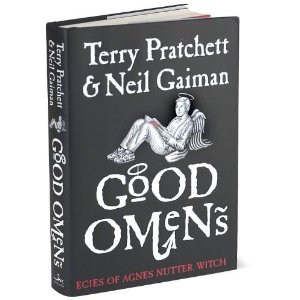 After having this book recommended to me for several years, I have finally finished Good Omens. I think my enjoyment of the book suffered from having read it over lunch hours, in small pieces over a few weeks, or perhaps my expectations were a bit high.

This book is a sharp satire of Christianity, Armageddon, and pop culture, where Armageddon is sent awry by a series of mishaps and coincidences. It starts with a bureaucratic mix-up at the hospital and a conspiracy between two opponents who find they prefer the status quo rather than the uncertainty of the battle that seems destined to come. An angel and a demon decide to cooperate in educating the child Antichrist, as a means of hopefully balancing his nature so that Armageddon could be avoided. Of course, they are focusing their efforts on the wrong child, and the entire thing is seemingly left to chance for the most part. The only person who seems able to see where the Divine Plan is headed is the descendant of a witch who recorded her startlingly accurate prophecies in a manner that is difficult to understand.

I enjoyed how, despite the sense of predestination that hangs over the forthcoming Armageddon, the events of the story hinged on so many haphazard events and accidents. Even the angels and demons seemed bumbling, and the English seem particularly good at skewering bureaucracy, to my endless delight. I liked some of the minor characters more than the main characters, particularly Anathema and Newton, who seemed very mechanical to me. Characters like Famine, the old busybody writing letters to the editor, and minor plot points like the telemarketer are very funny, however.

It was clever, funny, and of course well written, but it just wasn’t  as compelling as I find most of Gaiman’s work. I know I am the exception in this, as this book has an enormous and devoted following. I have not read anything by Terry Pratchett before, but have read lots of Neil Gaiman. I have friends who adore Pratchett, so I will have to try some of his books and then try again with Good Omens.

You should all go to the Advent Book Blog – great recommendations, great contests, and they are always looking for input!